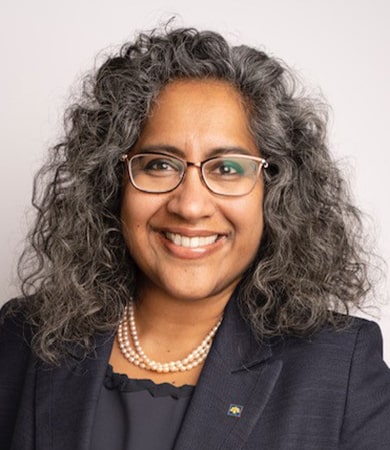 Bindu Cudjoe is the Chief Legal Officer and Corporate Secretary for Laurentian Bank of Canada, serving as a member of its executive team. She leads the legal, corporate secretariat and regulatory risk management functions responsible.

Previously, she was Senior Vice President, General Counsel and Corporate Secretary for CWB Financial Group, and prior to that served in a series of more progressive roles at BMO Financial Group, most recently as Vice President, Deputy General Counsel – Technology and Operations & Chief Knowledge Officer. Bindu began her legal career at Borden Ladner Gervais LLP and continued as Partner with McMillan LLP in the financial services group.

She is a mother of three, active in her professional and local communities and is currently:

· chair and director of the Oakville Community Foundation

· director of the global board of the Association of Corporate Counsel

· director of the National GC Network

· member of the advisory board for Alexa Translations

A frequent speaker in Canada and the U.S. on issues of innovation in the legal industry, legal operations and equity, diversity and inclusion more broadly, Bindu received the President’s Award for Women General Counsel Canada in 2021, was nominated as a Female Trailblazer by Canadian Lawyer magazine in 2021, and named one of the Top 25 Most Influential Lawyers in Canada by Canadian Lawyer Magazine in 2016 and a Lexpert Rising Star: Leading Lawyers under 40 in 2014